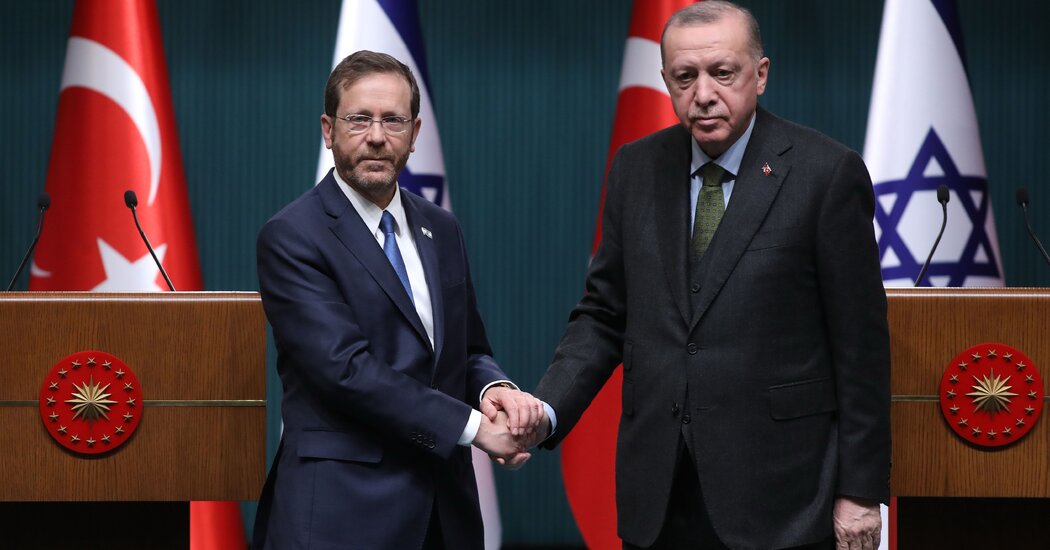 JERUSALEM — After years of testy, on-again-off-again relations, Israel and Turkey announced on Wednesday that they were restoring full diplomatic ties

JERUSALEM — After years of testy, on-again-off-again relations, Israel and Turkey announced on Wednesday that they were restoring full diplomatic ties and would be exchanging ambassadors again after not doing so for four years.

In recent signs of a thaw, Israel’s president, Isaac Herzog, was received in March with pomp and ceremony by President Recep Tayyip Erdogan of Turkey during a state visit that was described by both sides as an effort to reset the broken relations between the onetime regional allies. The visit was the highest-level meeting of an Israeli leader in Turkey in 14 years.

The resumption of relations with Turkey “is an important asset for regional stability and very important economic news for the citizens of Israel,” Israel’s interim prime minister, Yair Lapid, said in a statement on Wednesday, adding, “We will continue to strengthen Israel’s standing in the world.”

Mr. Herzog’s trip in March was followed with a May visit by Turkey’s foreign minister, Mevlut Cavusoglu, to Israel, the first such trip in 15 years. And in June, Mr. Lapid visited Ankara, the Turkish capital, in his capacity as Israel’s foreign minister, in part to thank the Turkish authorities for their help in foiling what officials described as a recent Iranian plot to kidnap or kill Israeli nationals in Istanbul.

Mr. Lapid holds the office of acting prime minister in the caretaker government, with national elections scheduled for Nov. 1 — Israel’s fifth such vote in under four years. His office said that the restoration of full diplomatic relations with Turkey came in the wake of understandings reached during his visit to Ankara and a subsequent conversation with Mr. Erdogan.

Mr. Cavusoglu called the reappointment of Turkey’s ambassador to Israel “important in the development of bilateral relations.”

Once Israel’s closest friend in the Muslim world and a significant trading partner, Turkey cut diplomatic ties after a deadly confrontation in 2010 between Israeli commandos and Turkish activists on a passenger vessel that had tried to breach Israel’s naval blockade of the Gaza Strip, the Palestinian coastal territory under the control of the Islamist militant group Hamas.

The ship, the Mavi Marmara, was part of a flotilla carrying aid to Gaza when Israeli naval commandos rappelled onto its deck and killed nine activists after being met with violent resistance. A 10th activist later died of his wounds.

Though some level of diplomatic ties had since been restored, Israeli-Turkish relations have in recent years had their ups and downs. The two countries resumed full diplomatic relations in 2016 after Israel agreed to pay about $20 million into a compensation fund for the families of those killed on the Mavi Marmara.

Turkey, in turn, dropped its criminal charges against the Israeli officers involved in the confrontation. Israel also asked the Turkish authorities to prevent Hamas operatives in Turkey from orchestrating attacks against Israel.

But that thaw did not last long. Another downturn came in late 2017, with President Donald J. Trump’s decision to recognize Jerusalem as the capital of Israel.

Mr. Erdogan has championed the Palestinian cause and strongly criticized Israeli policy toward the Palestinians on various occasions. He has compared Israel to Nazi Germany and accused the Israelis of genocide after their forces killed scores of Palestinian protesters during clashes along the Gaza border fence in May 2018, on the day that the United States moved its embassy from Tel Aviv to Jerusalem.

After the border violence and killings, Turkey ordered Israel’s ambassador to leave the country and recalled the Turkish ambassador from Tel Aviv “for consultations.” Hours later, the Israeli Foreign Ministry said that it had summoned Turkey’s consul general to Jerusalem and advised him to return to his country “for a while.” The break in high-level diplomatic representation lasted just over four years.

Mr. Erdogan has indicated a willingness for warmer ties for more than a year, after Naftali Bennett replaced Benjamin Netanyahu as Israel’s prime minister in June 2021, and once Mr. Herzog became president a month later. Mr. Erdogan has expressed a desire for Turkey to tap into Israel’s lucrative natural gas discoveries in the Mediterranean.

Israel, for its part, has recently shown an increasing interest in building closer regional ties with other strategic powers in the Mideast.

“Israel has a paramount interest in fully restoring its diplomatic ties with Turkey,” said Dore Gold, president of the Israeli think tank Jerusalem Center for Public Affairs. In June 2016, Mr. Gold signed a normalization agreement with Turkey in his former role as director general of the Israeli Foreign Ministry.

“Despite the setbacks in their relations in years past, both Israel and Turkey have shared concerns today about the spreading of Iranian influence in the Middle East, especially Iran’s quest for a nuclear weapons capability,” Mr. Gold noted.

Welcoming the announcement on Wednesday, Mr. Herzog said that the restoration of full diplomatic relations would “encourage greater economic relations, mutual tourism, and friendship between the Israeli and Turkish peoples.”

“Good neighborly relations and the spirit of partnership in the Middle East are important for us all,” he added.

7 Awesome Things To Do In Abu Dhabi, UAE 0

How Nina Dobrev and Julianne Hough Mix Friendship and Business 0